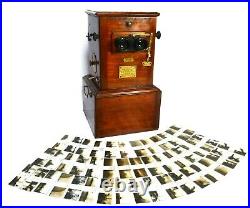 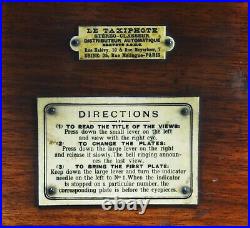 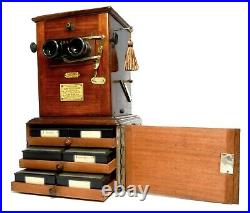 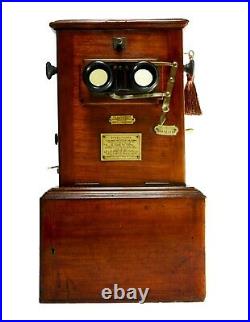 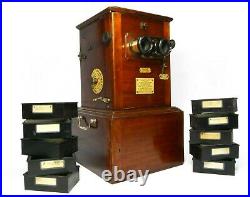 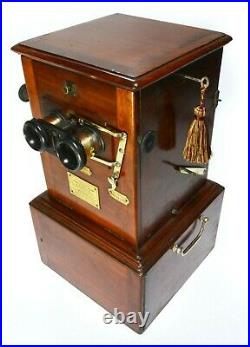 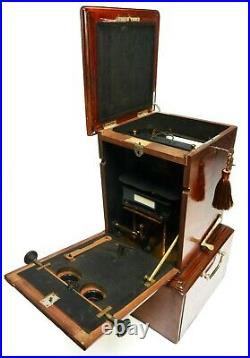 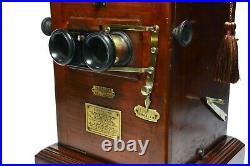 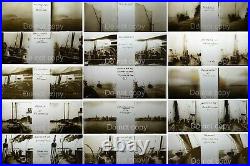 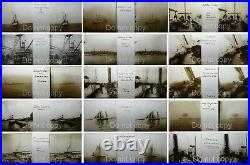 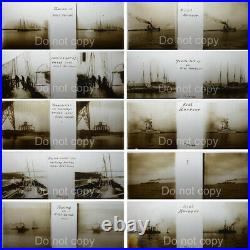 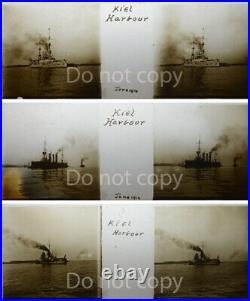 An antique tabletop stereoscope by Jules Richard of Paris together with a collection of 45 glass stereoviews depicting an epic voyage aboard the Camper and Nicholson sailing yawl Namara just before the outbreak of World War 1. The stereoscope bears a makers plate to the front carrying the words Le Taxiphote Stereo Classeur Distributeur Automatique, Brevete SGDG together with the companys address, and below this a further plate with operating instructions. Internally, it is fitted with a mechanical slide change mechanism accepting the standard Verascope 45mm x 107mm glass slides. On the death of his father in 1876, he took over the company, forming a partnership with his younger brother Max under the well-known Richard Freres (in English, Frere Brothers) name. They made a wide range of scientific equipment but were best known for their stereoscopic cameras and viewing equipment, produced from the 1880s right through to the 1930s. Richards Le Taxiphote was patented in 1899, with this example most likely dating to around 1910. The Taxiphote was technically the most sophisticated of the companys stereo viewers and a significant improvement over the more basic handheld viewers developed under the Verascope name. The instrument was fitted with a lever to the right for advancing the slides, with another control to the left lifting a flap to allow the slide annotation to be read with the right eye. Focussing was achieved by means of a rack and pinion adjustment, while another lever allowed the separation of the stereo pair of eyepieces to be adjusted. Included within this sale is a superb collection of glass stereo positives all unique images – depicting the 58 ton 1894-built sailing vessel,’Namara’. The images were taken just prior to the outbreak of World War One and provide a superb three dimensional representation of the yachts passage across the North Sea and into the Baltic, visiting Denmark, Sweden and Finland, and then past German military vessels laid up in Kiel Harbour before navigating the Kaiser Wilhelm Canal through to Cuxhaven on the German North Sea Coast. The item “Jules Richard Taxiphote, antique tabletop stereoscope c/w WW1 shipping slides” is in sale since Saturday, August 7, 2021. This item is in the category “Collectables\Photographic Images\Antique (Pre-1940)\Stereoviews”. The seller is “james_cumbria” and is located in Penrith, Cumbria. This item can be shipped to United Kingdom, Austria, Belgium, Bulgaria, Croatia, Cyprus, Czech republic, Denmark, Estonia, Finland, France, Germany, Greece, Hungary, Ireland, Italy, Latvia, Lithuania, Luxembourg, Malta, Netherlands, Poland, Portugal, Romania, Slovakia, Slovenia, Spain, Sweden, Australia, United States, Bahrain, Canada, Japan, New Zealand, China, Israel, Hong Kong, Norway, Indonesia, Malaysia, Singapore, South Korea, Switzerland, Taiwan, Thailand, Bangladesh, Bermuda, Guernsey, Gibraltar, Iceland, Jersey, Jordan, Liechtenstein, Sri lanka, Monaco, Maldives, Oman, Pakistan, Saudi arabia, United arab emirates, Ukraine, Kuwait, Qatar.