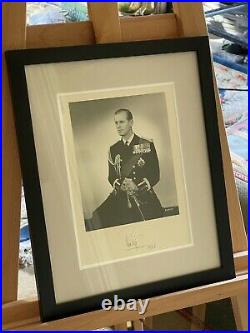 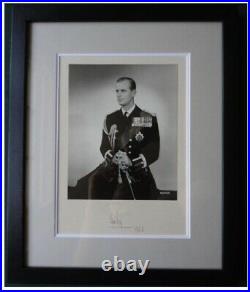 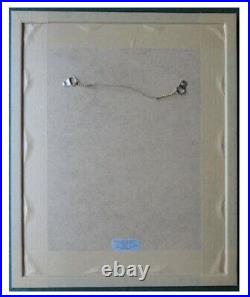 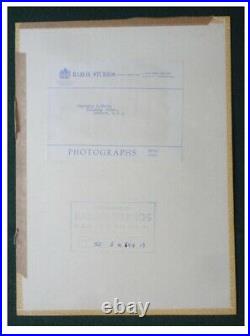 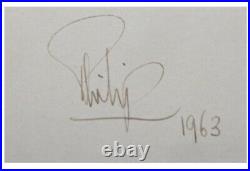 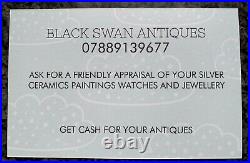 Fine hand signed photograph dated 1963 of Prince Philip, Duke of Edinburgh (1921 -) dressed in military uniform by society photographer Baron. Stamped on the reverse with Baron’s label and stamp stating that it was sent to RAF Captain D. Philip is the husband of Queen Elizabeth II. He is the longest-serving consort of a reigning British monarch and the oldest-ever male member of the British royal family. A member of the House of Schleswig-Holstein-Sonderburg-Glücksburg, Philip was born in Greece into the Greek and Danish royal families, but his family was exiled from Greece when he was an infant. After being educated in France, Germany, and the United Kingdom, he joined the British Royal Navy in 1939, at the age of 18. From July 1939, he began corresponding with the 13-year-old Princess Elizabeth (his third cousin through Queen Victoria, and the elder daughter and heir presumptive of King George VI) whom he had first met in 1934. During the Second World War he served with the Mediterranean and Pacific fleets. After the war, Philip was granted permission by George VI to marry Elizabeth. Before the official announcement of their engagement, he abandoned his Greek and Danish royal titles and became a naturalised British subject, adopting the surname Mountbatten from his maternal grandparents. After an engagement of five months, as Lieutenant Philip Mountbatten, he married Elizabeth on 20 November 1947. Just before the wedding, the King granted him the style of “His Royal Highness” and the title Duke of Edinburgh. Philip left active service, having reached the rank of commander, when Elizabeth became Queen in 1952. His wife made him a prince of the United Kingdom in 1957. Philip has four children with Elizabeth: Prince Charles, Princess Anne, Prince Andrew, and Prince Edward. He has eight grandchildren and five great-grandchildren. Through a British Order in Council issued in 1960, descendants of Philip and Elizabeth not bearing royal styles and titles can use the surname Mountbatten-Windsor, which has also been used by some members who do hold titles, such as Charles and Anne. A keen sports enthusiast, Philip helped develop the equestrian event of carriage driving. He is a patron of over 800 organisations and chairman of the Duke of Edinburgh’s Award scheme for people aged 14 to 24. Henry Nahum, known professionally as Baron (1906 – September 1956) was a British society and court photographer. He was born in England of Italian Jewish heritage. Having embarked on a career as a photographer, in his thirties he began to find prominence for his pictures of the ballet, and was often found at the Sadler’s Wells ballet company. After the war he concentrated on society and celebrity portraits. A friend of Prince Philip he was appointed a Court Photographer to the British Royal Family, and took the official photographs for many occasions such as the wedding of Philip to Princess Elizabeth in 1947, the christenings of their children Charles and Anne and other occasions. Housed in a contemporary black wooden frame with protective UV glass. Frame Size: 31.5 x 38.5 cm approx. Photograph Size: 33.5 x 24.5 cm approx. The item “Prince Philip Duke of Edinburgh Antique Signed Presentation Photo 1963 by Baron” is in sale since Wednesday, April 14, 2021. This item is in the category “Collectables\Historical Memorabilia\Royalty Collectables”. The seller is “ma_gar8″ and is located in Bushey. This item can be shipped worldwide.