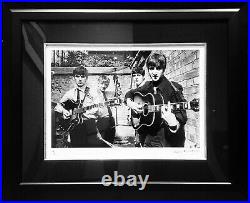 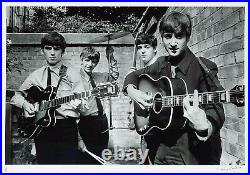 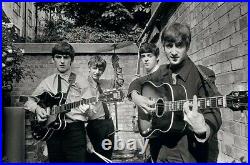 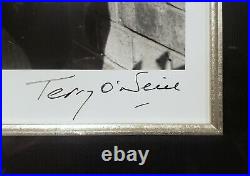 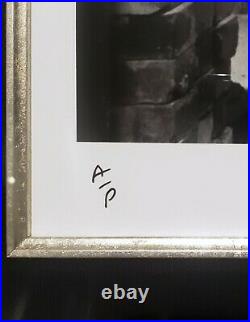 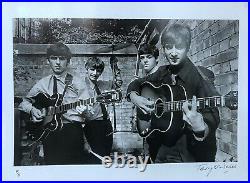 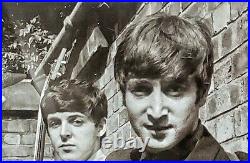 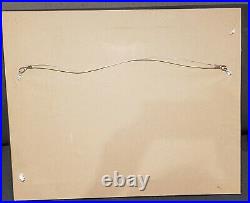 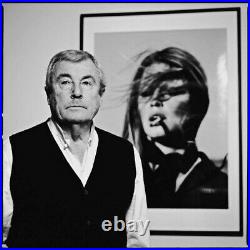 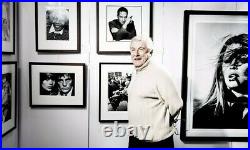 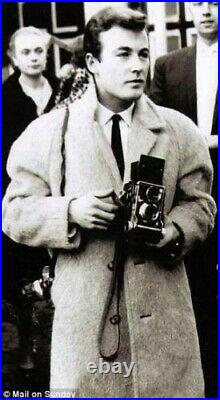 The Beatles, Abbey Road Studios, London, England 1963. A portion of the sale price will benefit The Musicares Foundation. Thank you for your support! Terry O’Neill, 1963. The Beatles first major group portrait taken by Terry O’Neill in the backyard of the Abbey Road Studios in London during the recording of their first hit single and album Please Please Me, January 1963. Color: Black and White. Signed: Signed AP (Artist Proof). Paper 16″ X 20″. Image Size 12″ X 16″. Condition: Mint condition, newly framed, never displayed or hung! (More photos available by request). Brand new gallery frame in Black Wood and hand wrapped linen matting with a silver leaf wood filet. Hand signed by Terry O’Neill. Terry O’Neill (photographer). From Wikipedia, the free encyclopedia. Terence Patrick O’Neill. Liam Dunaway O’Neill. (Born 30 July 1938 – Died Nov 16, 2019) is an English photographer. He gained renown documenting the fashions, styles, and celebrities of the 1960s. O’Neill’s photographs capture his subjects candidly or in unconventional settings. His work has been featured in numerous exhibitions. He was awarded an Honorary Fellowship of the Royal Photographic Society. And the Society’s Centenary Medal in 2011. O’Neill began his career working in a photographic unit for an airline at London’s Heathrow Airport. During this time, he photographed a sleeping figure in a waiting area who, by happenstance, was revealed to be Britain’s Home Secretary. O’Neill thereafter found further employment on Fleet Street. With The Daily Sketch. His first professional job was photographing Laurence Olivier. During the 1960s, in addition to photographing contemporary celebrities such as Judy Garland. And The Rolling Stones. He also photographed members of the British royal family. And prominent politicians, showing a more natural and human side to these subjects than had usually been portrayed before. O’Neill’s photographs of Elton John. Are among his most well-known. A selection of them appeared in the 2008 book, Eltonography. Also considered among his most famous images are a series of American actress Faye Dunaway. (his girlfriend at the time) at dawn on 29 March 1977, lounging next to the swimming pool at the Beverly Hills Hotel. The morning after winning the Academy Award for Best Actress. With several newspapers scattered around her and her Oscar statuette prominently shown on a table beside her breakfast tray. The series was photographed in both color and black and white. One black and white photo from the series is in the permanent collection of the. O’Neill was credited (as Terrence O’Neill) as an executive producer of the 1981 film. His only other film credit was for still photography for the 1987 film. O’Neill had a longtime relationship with Faye Dunaway, and married from 1983 until 1986. Their son, Liam Dunaway O’Neill, was born in 1980. In 2003, he was quoted in the U. As saying Liam was adopted and not their biological son, contrary to Dunaway’s public assertions. O’Neill later married Laraine Ashton, a former model agency executive. Chris Beetles Fine Photographs, London, 2006. Getty Image Gallery, the Village, Westfield London. San Francisco, CA, JulyAugust in 2009. Photographs of Elton John. Chris Beetles Fine Photographs, London, 2010. Terry O’Neill, Reworked, 2010. Six artists were given their choice of the photographer’s imagery to re-work as they wished. Chris Beetles Fine Photographs, London, 2011. Ransom Art Gallery, London, September 2016. O’Neill’s David Bowie photographs coinciding with the publication of. Bowie By O’Neill. Travelled to Mouche Gallery, Beverly Hills, Los Angeles, 29 October 9 November. Iconic Images Gallery, London, 2018. Sinatra: Frank and Friendly- A Unique Photographic Memoir of a Legend , 2007. All About Bond , 2012. Terry ONeills Rock n Roll Album , 2014. Two Days that Rocked the World: Elton John Live at Dodger Stadium , 2015. Breaking Stones 1963 1965: A Band on the Brink of Superstardom. Bowie By ONeill (2016) , 2016. Terry ONeill : Every Picture Tells a Story , 2016. When Ziggy Played The Marquee , 2017. Led Zeppelin Live : 1975 – 1977 , 2018. Terry O’Neill: Rare & Unseen , 2018. 2004: Honorary Fellowship of the Royal Photographic Society. 2011: Royal Photographic Society’s Centenary Medal. O’Neill was appointed Commander of the Order of the British Empire. (CBE) in the 2019 Birthday Honours. For services to photography. The item “Beatles Abbey Road Studios London 1963 B&W Silverprint signed by Terry O’Neill” is in sale since Wednesday, January 29, 2020. This item is in the category “Art\Art Photographs”. The seller is “anjamil0″ and is located in Beverly Hills, California. This item can be shipped worldwide.