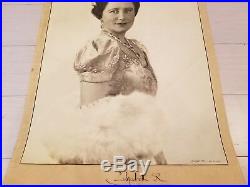 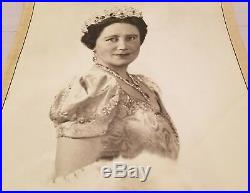 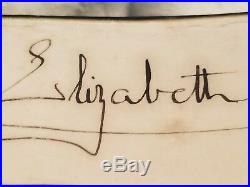 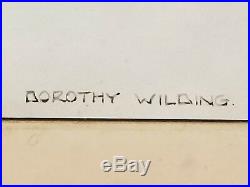 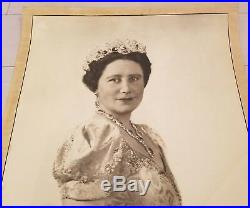 For your consideration is an exceedingly rare and important rare large format 16″x23″ Royalty Photograph of Queen Elizabeth, the Queen Mother, hand signed by Queen Elizabeth R, 1949 UK. Photo by Artist / Photographer, Dorothy Wilding. Elizabeth Angela Marguerite Bowes-Lyon (4 August 1900 – 30 March 2002) was the wife of King George VI, and the mother of Queen Elizabeth II and Princess Margaret, Countess of Snowdon. She was queen of the United Kingdom and the Dominions from her husband’s accession in 1936 until his death in 1952, after which she was known as Queen Elizabeth The Queen Mother, to avoid confusion with her daughter. She was the last empress of India. Born into a family of British nobility, she came to prominence in 1923 when she married the Duke of York, the second son of King George V and Queen Mary. The couple and their daughters embodied traditional ideas of family and public service. She undertook a variety of public engagements and became known for her consistently cheerful countenance. In 1936, her husband unexpectedly became king when his older brother, Edward VIII, abdicated in order to marry the American divorcée Wallis Simpson. Elizabeth then became queen. She accompanied her husband on diplomatic tours to France and North America before the start of the Second World War. During the war, her seemingly indomitable spirit provided moral support to the British public. After the war, her husband’s health deteriorated and she was widowed at the age of 51. Her elder daughter, aged 25, became the new queen. After the death of Queen Mary in 1953, Elizabeth was viewed as the matriarch of the British royal family. In her later years, she was a consistently popular member of the family, even when other members were suffering from low levels of public approval. She continued an active public life until just a few months before her death at the age of 101 years, 238 days, which was seven weeks after the death of her younger daughter, Princess Margaret. Dorothy Frances Edith Wilding (10 January 1893 – 9 February 1976) was a noted English society photographer from Gloucester. She wanted to become an actress or artist but this career was disallowed by her uncle, in whose family she lived, so she chose the art of photography which she started to learn from the age of sixteen. By 1929 she had already moved studio a few times and in her Bond Street, London, studio she attracted theatrical stars and shot her first British Royal Familyportrait of the 26-year-old Prince George (later Duke of Kent) in 1928. Six years later Wilding was selected to take the official engagement photographs of Prince George before his marriage to Princess Marina of Greece. In 1935 a sitting booked for a Mrs Simpson on a Friday found Wilding away from the studio. Instead her leading deputy camera operator Maryon Parham took photographs of Wallis Warfield Simpson, the future Duchess of Windsor, who was accompanied to the studio by Edward, Prince of Wales at a time when the relationship was not mentioned in the British press. A hand-coloured image from this session would later appear on the cover of Time magazine, marking Wallis as “Woman of the Year”. A further important series of Royal Sittings were also taken when Wilding was not present when Wilding was based in America. A previous portrait sitting of Elizabeth Bowes-Lyon, wife of George VI, had turned into a double portrait of the royal couple and was adapted for the 1937 Coronation issue stamp. That portrait led to her being the first woman awarded a Royal Warrant to be the official photographer to a King and Queen at their coronation. She opened a second photo studio in New York City in 1937. The item “Elizabeth II Queen Mother Signed Royal Photo Hope Diamond The Crown Dowton Abbey” is in sale since Monday, April 8, 2019. This item is in the category “Collectibles\Historical Memorabilia\Royalty Collectibles”. The seller is “galleryoff5th” and is located in New York, New York. This item can be shipped worldwide.